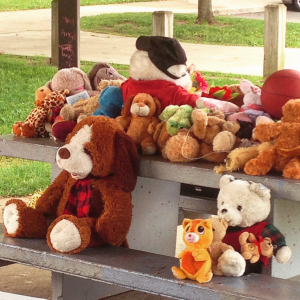 The lunches this year began with police violence in Ferguson and ended with Michael Rakowitz’s utopian project for the right to safety in Cleveland following the Tamir Rice shooting. The issue of police violence and militarization ran throughout the year but was transferred by participants into a critique of authoritarianism in the university; it often resurfaced in discussions even when the official topic of the table wasn’t the right to safety.

September 10th: Being a decent citizen in the wake of Ferguson

September 24th: Ferguson, continued (the militarization of the police)

October 8th: An Intellectual adventure -the academy as a place of stupification (Rancière’s The Ignorant Schoolmaster)

November 5th: Let it be stated – the university is intrinsically unethical (Pierre Hadot’s Philosophy as a Way of Life)

December 3rd: Future generations, the Keystone Pipeline, and colonialism (this session was changed and became a discussion of police violence, again, through the reality of Tamir Rice’s burial; a family member of the Rice family was present)

February 18th: Paolo Freire’s Pedagogy of the Oppressed a photograph you happen to have taken that, on reflection, shows everyday oppression

February 25th: Meeting with Cynthia Willott, ISSA lecturer with the Baker Nord Center for the Humanities