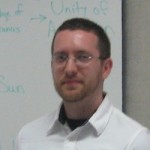 Nolen Gertz received his Ph.D in Philosophy from The New School for Social Research in 2012. His doctoral dissertation was a criticism of Just War Theory, arguing that JWT’s common morality perspective is both unrealistic and a contributor to combatant suffering. This argument was expanded in his book, The Philosophy of War and Exile: From the Humanity of War to the Inhumanity of Peace (Palgrave-Macmillan, 2014).

His research interests include applied ethics, social and political philosophy, phenomenology, existentialism, and aesthetics. He is currently working on expanding the theory of responsibility argued for in his book into new projects focused on investigating the relationship between responsibility and technology.

He is a Research Associate in Military Ethics at the Inamori International Center for Ethics and Excellence at Case Western Reserve University. He is on the Editorial Review Board for Rowman & Littlefield International’s book series Off the Fence: Morality, Politics and Society.

A complete list of his publications can be found here and here.